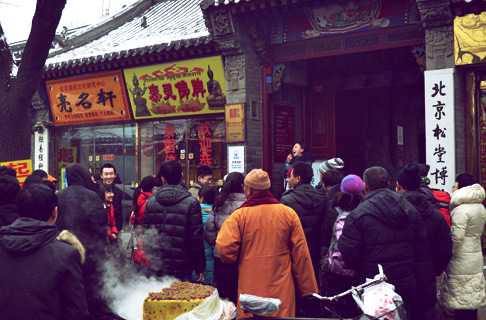 Before we get around to the veggie walking tour, a breaking news update: Rumor has it there are weasels in the hutongs. Kyle says he saw one, and the thought of furtive hutong weasels hiding in the drain pipes and making legends of themselves pleases me. I spent at least four seconds brainstorming how to feed them whole coffee berries then harvest the digested beans from their poop like they do in Vietnam. SARS, SHMARS, that coffee is ah-may-zing. END_OF_DOCUMENT_TOKEN_TO_BE_REPLACED

Home in the Hutongs

The twenty-minute tirade of cursing, every filthy syllable of which passed with sparkling clarity through the shuttered windows of the second-story balcony, started in the hutong moments after the empty moving truck pulled away, leaving the last load of our boxes stacked on the living room floor. END_OF_DOCUMENT_TOKEN_TO_BE_REPLACED

Two Feet in the the BoHai Sea: A Fall Wedding in Dalian

If I’d known that accepting an invitation to a Chinese wedding in another city meant the bride and groom had to pay for my hotel, my guilt would have certainly forced me out of DaLian a day sooner. As it was, I didn’t find out until I arrived that the room had been covered, and threats to sneak into the newlywed’s home and stuff the money into their socks were met with solemn shakes of the head (“It is our duty”).

LiuChi and LiuKe put me up in a Chinese military aviation hotel northwest of the city center, which turned out to be exactly like a regular Chinese hotel, except the ladies at the front desk were in PLA uniforms, and everyone assured me it was safer somehow. END_OF_DOCUMENT_TOKEN_TO_BE_REPLACED

The Great Wall of Corn, Wasps and Possibly Duck Brains

I have very few written records of my first year here, but I can remember almost every minute, because almost every minute was a fist full of formative experience in my psychological groin. I remember seeing the school chef at the outdoor market picking out a slimy haunch of rotting beef – “the best meat in a 30-mile radius”, he said proudly. I remember waking up covered in a blanket of ladybugs during the annual infestation. We picked them out of our hair for days.

And I remember realizing that the nice white bedspread I was so indignantly haggling over at the village shop was expensive because it was actually a funeral shroud. I’m pretty sure I accused the shopkeeper of overcharging foreigners and insisted I “knew how much a duvet should cost”. I’m really kind of an ass sometimes. END_OF_DOCUMENT_TOKEN_TO_BE_REPLACED

Dragon Boat Weekend in Gray Shanghai: Girl Talk and a lot About Trains

Posted from: Shanghai
For anyone who’s expecting to hear about exciting forays into the highrise mafia dens of Pudong: I was in Shanghai to see an old and very good friend from college, so my trip involved about 137 minutes of sightseeing and about 42,021 minutes of sitting in French Concession wine bars talking about boys.

END_OF_DOCUMENT_TOKEN_TO_BE_REPLACED

I’d like to be the kind of person who buys art, I really would. Less in a “hmnah, one more Monet and my collection will be complete,” kind of way and more in a “A fractal forged from rhinestones, dried egg yolk and meticulously-harvested Aboriginal virgin’s tears, you say? Name your price, sir,” kind of way. I’m most particularly in the market for artwork that makes my office floor feel more like an intentional re-enactment of poverty in France circa 1522 and less like a pile of dirty clothes interspersed with USB drives. END_OF_DOCUMENT_TOKEN_TO_BE_REPLACED

Teh Facebookz blew up a few days ago with the news that the Beijing PSB, in response to a viral video of a British man sexually assaulting a Chinese woman, is cracking down on foreigners illegally living or working in China. Non-Chinese and locals alike are urged to report on any laowai who violate the “Three Have Nots” – in other words, those who have no visa, no work permit or no residence permit.

Thanks a lot, gross British guy. Now Chinese women can only be raped by foreigners with tidy paperwork. END_OF_DOCUMENT_TOKEN_TO_BE_REPLACED

It’s not that I don’t like being a vegetarian. It’s just that like most limp-wristed liberals, when I’m watching Pride and Prejudice, sometimes I get one of those midnight cravings for a steaming plate of endangered animal genitalia (number 6 FTW!), and I just wish my stomach was still bubbling with the enzymes capable of processing animal proteins. I could could be enjoying a rubbery mouthful of seal penis right now, I often think to myself, doubting the validity of my life choices. END_OF_DOCUMENT_TOKEN_TO_BE_REPLACED

Adventures in Prostitution, or: I’m definitely going back for those dumplings

Javi and I got medicinal foot massages from the prostitutes at the bargain brothel down the street from my house. I first noticed the brothel on a walk one day; the sign outside says “24 hour foot massage”, and there’s a dumpling restaurant in the basement. Man, I thought, massage and dumplings at 3:00a.m.! Beijing has everything. END_OF_DOCUMENT_TOKEN_TO_BE_REPLACED

The staff of Seven Treasures Pond, our local Buddhist vegetarian restaurant, greeted us with such enthusiasm us that Kyle was sure they were secretly cannibals. “No one’s that happy to see you unless they plan to cook and eat your bubbling flesh,” he insisted, sniffing the appetizers. They fattened us up on a ginormous, boiled-at-the-table bowl of watercress, fake meatball, jujube and five spice soup. If this is Buddhism, I thought with a face full of lotus root, then namo-freakin-amituofo. END_OF_DOCUMENT_TOKEN_TO_BE_REPLACED