Winning Gold at the Midlands Addys 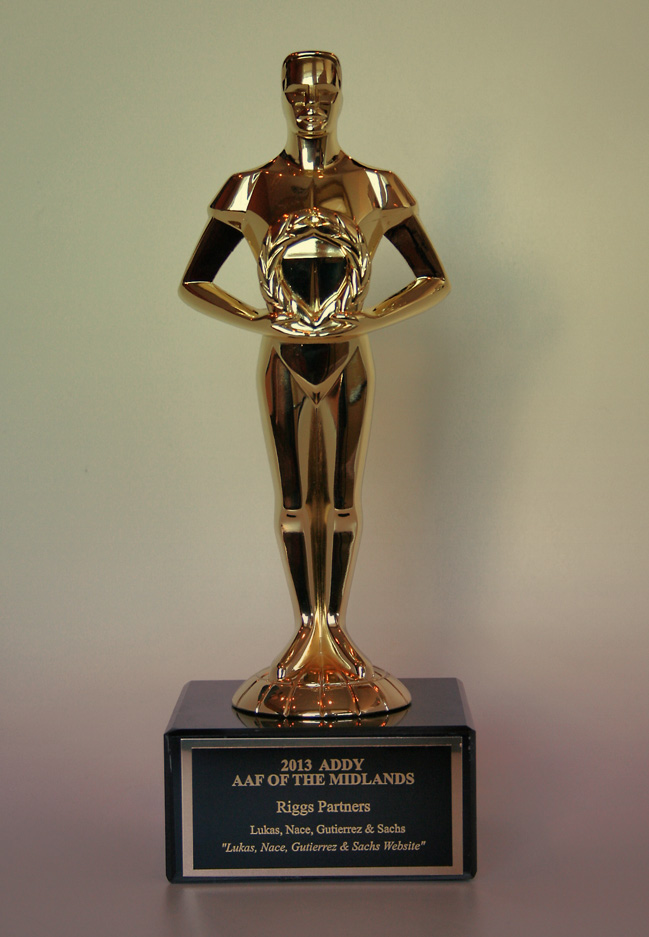 Sure is nice to wake up in the morning and find out your work won a snazzy first-place award in a contest you never entered, like we did here at the Pixellary this morning. So many thanks and congratulations to U.S.-based Pixellary collaborators Riggs Partners for sending in the ADDYs application and then – lo and behold – winning the darn thing.

We try not to be too excitable around here, but an ADDY is a big step up for a marketing-averse group like ours whose primary advertising strategy involves releasing free icon packs. And Riggs, thanks as well for the riotous creative all-hands – you guys give good collaboration.

The site in question was created for D.C. telecommunications law firm Lukas, Nace, Gutierrez & Sachs, a horizontally-scrolling WordPress-based site powered by the dark magics of jQuery and the blood of unicorn babies. The Pixellary was hired to take on the concepting, information architecture, design and development segments of the project, incorporating Riggs’ new brand LNG&S identity package into a digital environment.

Adventures in IA, or: we don’t actually need a home page

Last week, I was watching an episode of Elementary in which one of the almost-murder-victims, a web designer, breezes by the camera and tosses out a character-establishing quip, “Grid-based design is going the way of the dinosaur” *head toss, checks iPhone*. And although some not-actually-a-real-person who had about 45 seconds of screen time on a Sherlock Holmes spinoff isn’t exactly the fountainhead of tech gospel, I’ve been mumbling that under my breath for days. 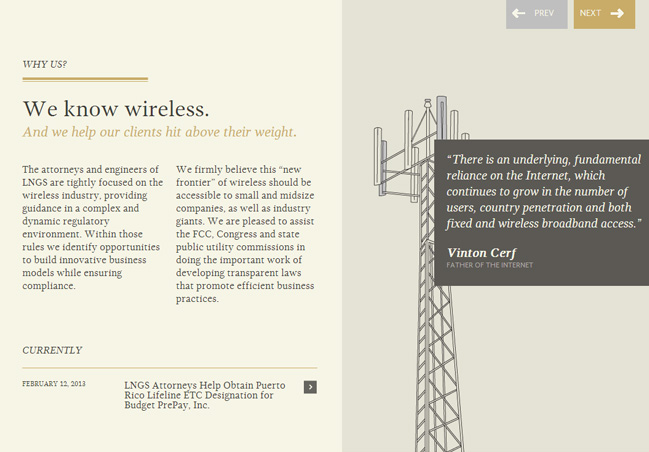 That’s why this design felt so right under my greasy little fingers, I thought, humming with nervous energy (and swearing to stop beginning each design process by whipping out the 978.gs Photoshop file). The thing is, it’s not that grid-based design is heading towards extinction. Grids are a series of squares. Visual artists have been into squares for a while, it’s likely they’ll stick around. But the constraints of a grid-based system really are dying.

That means that we’re more free than we’ve ever been to build design around content, to create a visual interface that fits the message it delivers. And it means that when, after several days of wading through content documents, you realize that the reason you can’t think of what should go on the home page is that nothing should go on the home page, you can create a layout that addresses that issue. 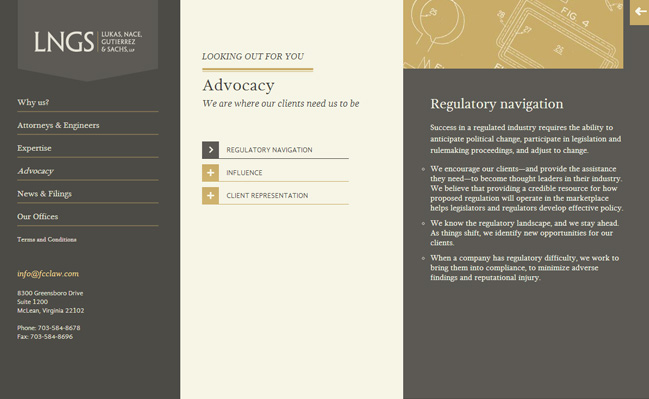 Watching developers cry is like watching your father break down in tears: the sight of someone so powerful reduced to shuddering sobs alters your world view in some fundamental way. Nothing feels safe anymore. Javi “Linux Fingers” Otero didn’t actually weep, per se, but I don’t even like to think how close we came to an alternate reality in which he did. Individually, each piece of the development was a layup. Taken together, all the fancy bits and bobs were a somersaulting one-two roundhouse kick to the face. So it’s a good thing we’re super into kicks in the face.

Data is added to the staff section of the site via WordPress custom post types, giving the end user a reasonable amount of control over making edits to the attorney biographies without needing to stick too big a toe in the HTML pool. 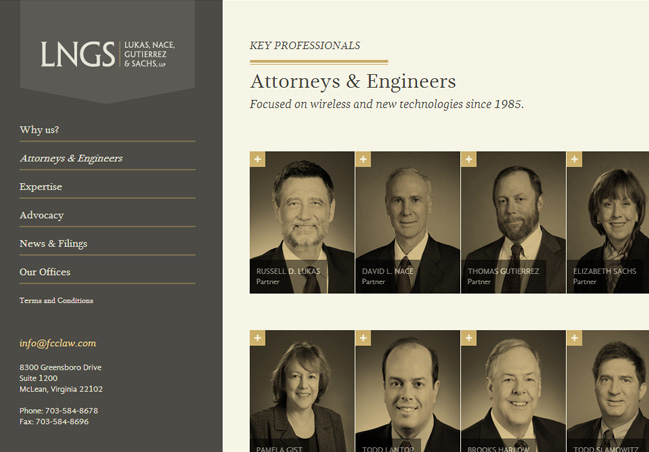 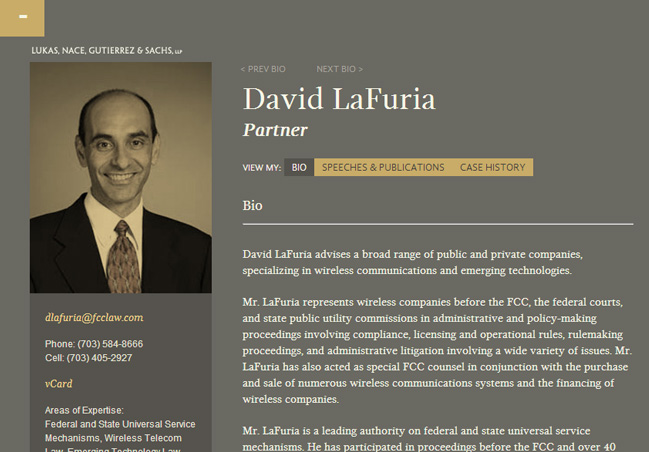 What’s the use of a website if you can’t link to a specific nugget of data? Course, the LNG&S site puts a bit of a damper on linking to internal pages by way of not having any. We solved that (at some length) with a URL that changes dynamically to match the currently active pane.

The site goes left. It goes right. Then it goes:

Up and Down: jScrollpane

Combined with some custom dual-panel click-to-switch panes, we implemented the jScrollpane script, letting us define scrollable segments within the page that are activated via mouse hover. So we get all the functionality of individual pages without the syad syad reality of page reloads. 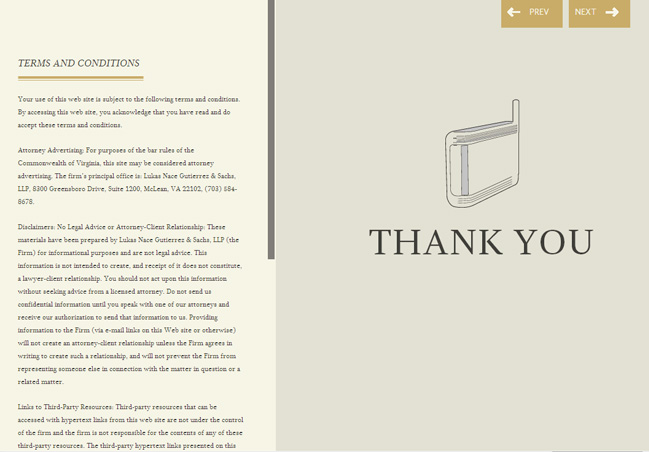 Welp, that’s a wrap. And if anyone else feels like sending our work off to receive various prizes, the floor is open. Email me when we win.