Home in the Hutongs

The twenty-minute tirade of cursing, every filthy syllable of which passed with sparkling clarity through the shuttered windows of the second-story balcony, started in the hutong moments after the empty moving truck pulled away, leaving the last load of our boxes stacked on the living room floor. 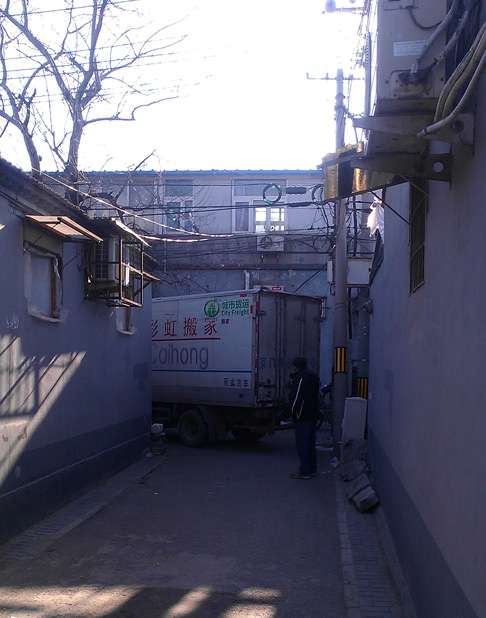 “Fuck fuck fuck motherfucker!” screamed a voice in Chinese. “Who fucking does that? What the fuck!”

After the first five minutes or so, I cracked the upstairs window and stuck an ear out, if only to better admire the guy’s stamina. Plus, we hutong ladies listen at keyholes. It’s just this thing we do. Whoever pissed him off is gonna get a face full of something unpleasant, I thought.

“Go get the new foreigners and make them pay for it,” said another voice. “It was their moving truck.”

Uh oh. We hutong ladies hear things we wish we could unhear. 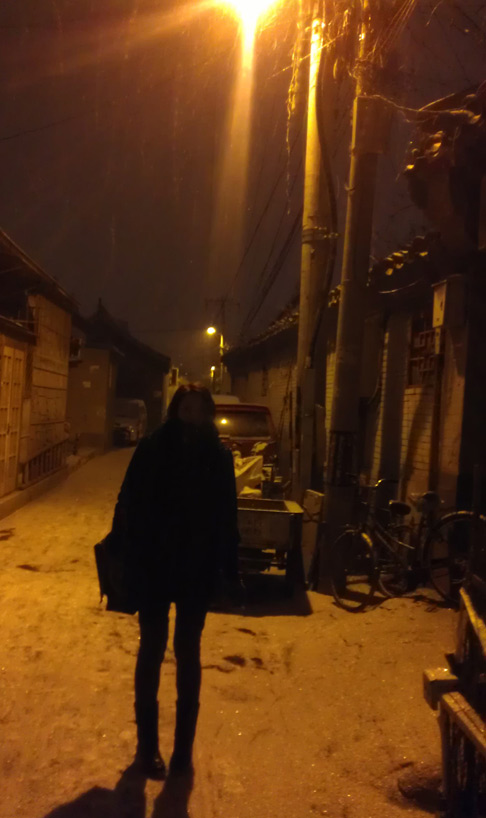 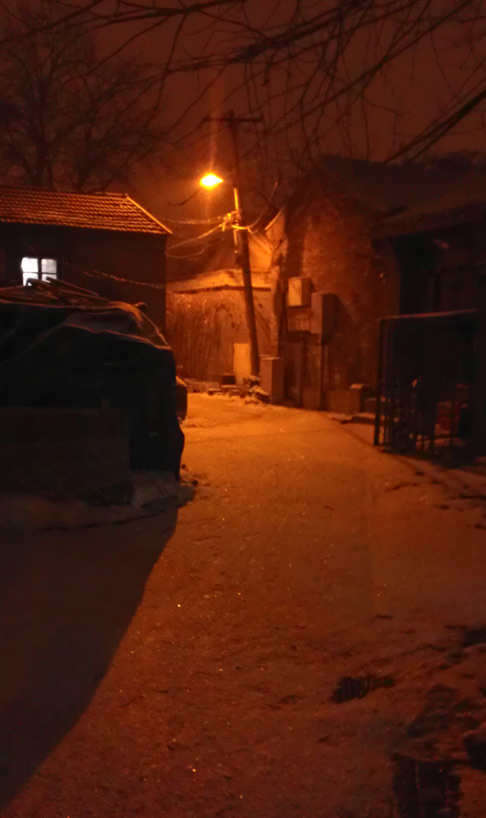 I pulled my snow boots on and reluctantly trudged out to face the music, whatever it was, knowing that the smell of egg noodles would lure me out eventually, and anyway, even if I could hide in the house for two weeks and subsist on chewing my cud, avoidance was futile. Back here, in a warren of homes so intensely tangled that I still get lost twenty yards from my front door, everyone is up in everyone else’s business, and whoever’s car the movers had backed into or whoever’s telephone wire they’d pulled down would come calling before long. But by the time I stepped outside into the cold the hutong was empty.

Hm. Wonder what that was about. 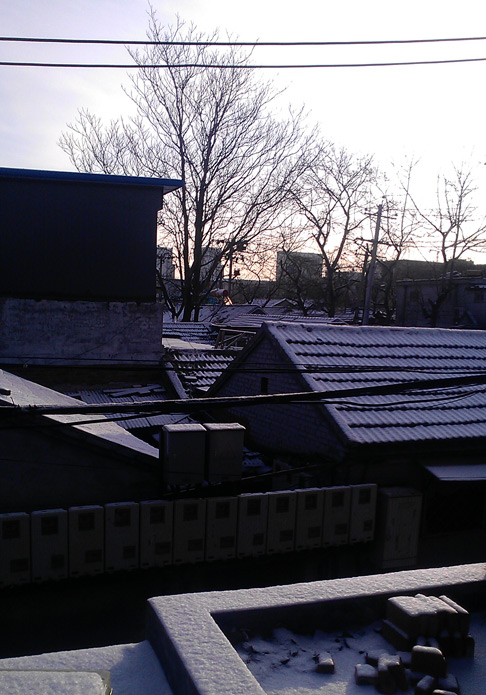 We made the move from our toasty warm but way-too-suburban skyrise to our city-center hutong duplex on the first day of what would turn out to be a vicious cold snap – they’re saying it’s the coldest Beijing winter in 30 years. For 48 hours, as the heaters kickstarted and the whole house ticked back up to a livable temperature, we could see our breath in the kitchen and didn’t dare take off our scarves and gloves. “Don’t turn over,” Kyle said, scrunching further down under the covers, “you’re letting the air under.” 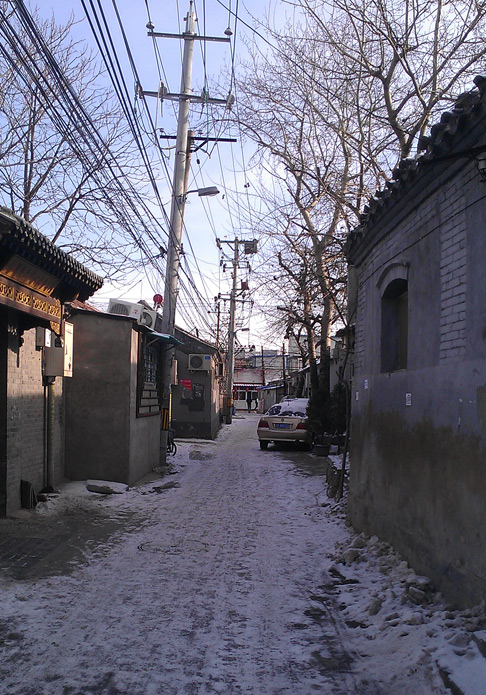 Ten years ago, hutong living was largely reserved for tough-as-nails, poor-as-dirt old Beijing families who’d been in the same home for generations. That, and self-flagellating western PhD candidates with an overdeveloped sense of adventure. The hutongs were a labyrinth of badly-insulated, badly-lit collapsing brick hovels with no bathrooms – public toilets were shared by everyone on the street. Houses were coal heated. Some dude on a bicycle with a cart attached pedaled around the neighborhood hollering and you’d trot outside, get your brick of coal, and drop it on the embers of the last one. 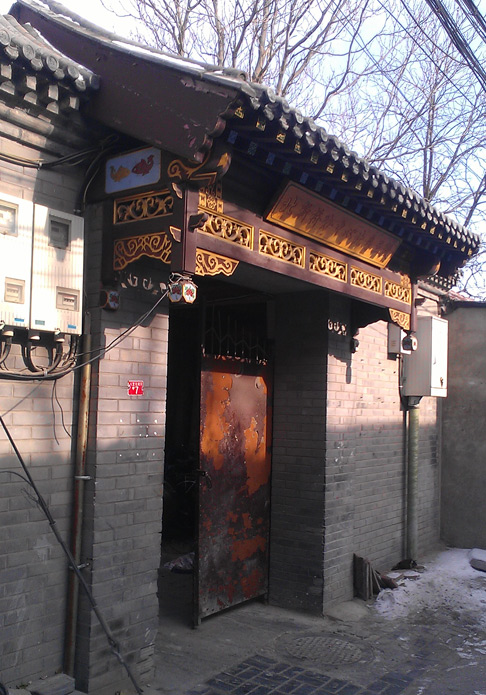 All in good fun during the summer months, but when the winter freeze sets in and it’s fifteen below, it’s like I said: you’d have to be destitute or on a quest for your spirit animal.

Anyway, those living conditions still widely exist in the hutongs, but a few years ago, an element of trendiness appeared. I’m not sure what the catalyst was, but suddenly Chinese landlords and foreign entrepreneurs had enough money to buy up a sprinkling of that promising retro architecture and renovate. Indoor bathrooms and radiators sprung up in some of the rentals. Nifty bars and restaurants started opening close by. Now, the hutongs have become a strange amalgamation of stylish artist-types with, as Kyle wryly put it, “a bit of pioneer spirit” living next to gaggles of battle-hardened elderly Chinese who uncomplainingly trudge outside in their pjs on a snowy midwinter night to piss in a hole in the ground. 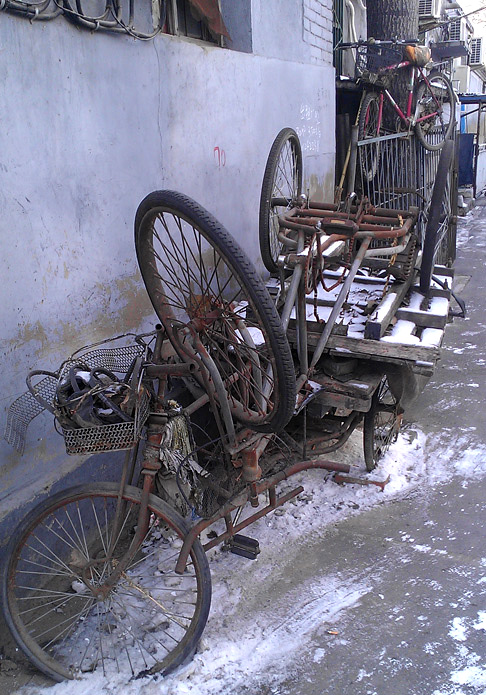 Compared to that prospect, our place is a little slice of paradise. Compared to American standards of living? Well, moving into a hutong you know very well that you’re trading a smidgen of comfort and modernity for a heaping helping of character and location. It’s just that the tradeoff isn’t nearly as painful as it once was. We’re still safely in “charming quirks” territory. The rooms here have seen the wrong side of a jackhammer so many times that there’s a sink inside the shower and one of the bathroom doors opens directly onto the front stoop. Yesterday, Kyle woke me up at six to ask if I knew a magical incantation to make the taps produce hot water – the plastic pipes had frozen. The repairman called this morning to say he didn’t dare climb up on the roof in the snow, and I’m embarassed to say how long it’s been since I’ve bathed. We’ve been using washcloths and warm water from the water cooler. 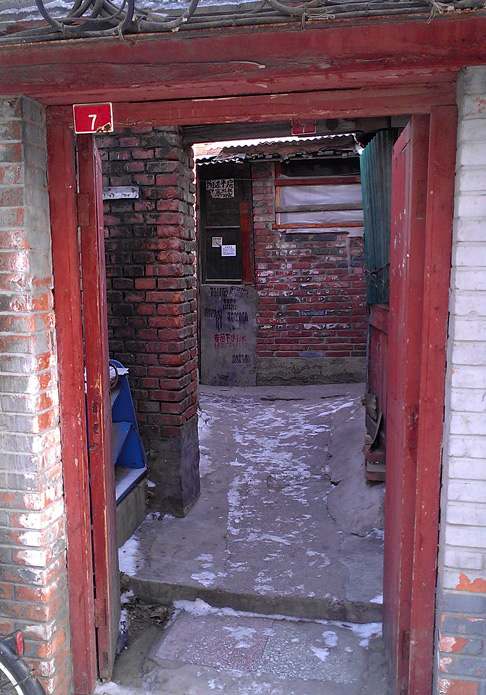 But none of this really bothers me. On the contrary, this tender bitching masks a streak of indelicate glee. There’ll be spring festival and the alleys will be so damn loud I won’t sleep for two weeks, and summer will blow through, and there’ll be rooftop chuanr nights, and then winter will come again and I’ll be right here, silly bear slippers and all, shivering under the showerhead.

Tags: China Last modified: July 14, 2013
Previous Story:
Two Feet in the the BoHai Sea: A Fall Wedding in Dalian
Next Story:
Another Year in Toxitopia, or: Low Levels of Micro-Particulates are for Sissies