Two Feet in the the BoHai Sea: A Fall Wedding in Dalian

If I’d known that accepting an invitation to a Chinese wedding in another city meant the bride and groom had to pay for my hotel, my guilt would have certainly forced me out of DaLian a day sooner. As it was, I didn’t find out until I arrived that the room had been covered, and threats to sneak into the newlywed’s home and stuff the money into their socks were met with solemn shakes of the head (“It is our duty”).

LiuChi and LiuKe put me up in a Chinese military aviation hotel northwest of the city center, which turned out to be exactly like a regular Chinese hotel, except the ladies at the front desk were in PLA uniforms, and everyone assured me it was safer somehow. 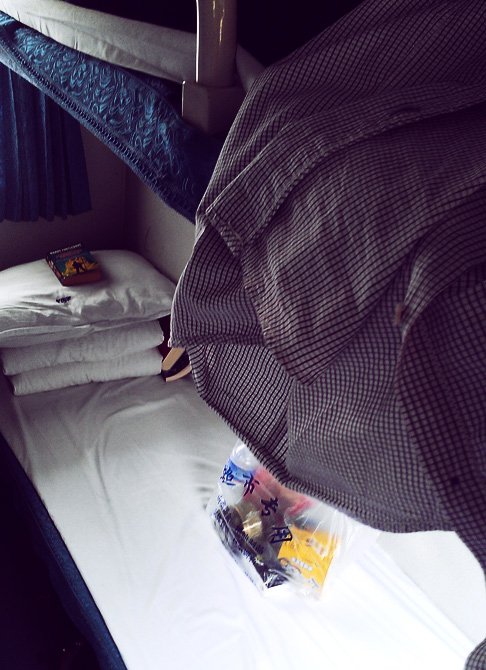 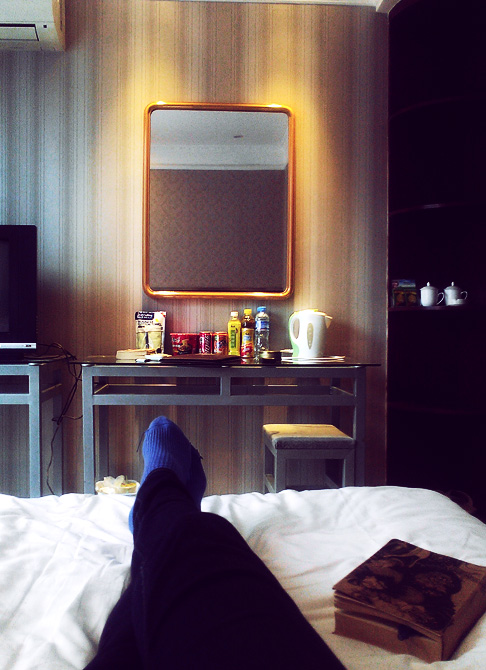 “I don’t think we have military hotels in the U.S.,” I told LiuChi, unpacking my bags. “At least I’ve never heard of any.”

LiuChi looked a little baffled. “Where does the army sleep if there’s a training exercise or an emergency, and there are no local barracks?”

I couldn’t answer that. “I thought foreigners weren’t allowed to stay at these kinds of places.”

“They’re not, but, I told them you were The Good Kind of Foreigner.”

If I start a band, I know what I’m calling it. 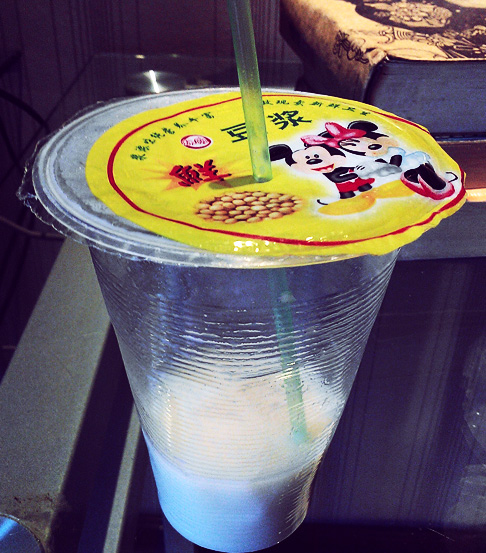 The place was your standard one-TV-and-a-hot-shower type of travel lodge, and LiuChi’s wedding guests took up quite a few of the rooms. In the morning, in the little square across the street, a vendor pitched up selling youtiao(fried sticks of dough) and warm soymilk for breakfast. After dark, a night market appeared there with the all the usual goodies: outdoor snack tables, cheap noodles, fresh fruits and vegetables, a couple isolated racks of clothes and of course, a severed pig’s head tossed onto the sidewalk. LiuChi yelped as she narrowly missed tripping over it and into a bowl of blood near the butcher’s tent. This brush with disaster bothered her not at all.

Modern Chinese weddings are utter pandemonium and begin at the crack of dawn. They consist, for the most part, of driving around the city taking pictures with the bridal party, popping confetti poppers and setting off fireworks, and then attending a ceremonial lunch banquet. 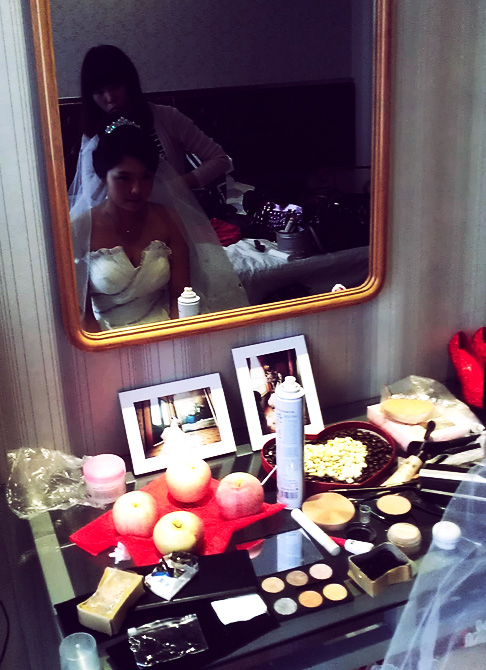 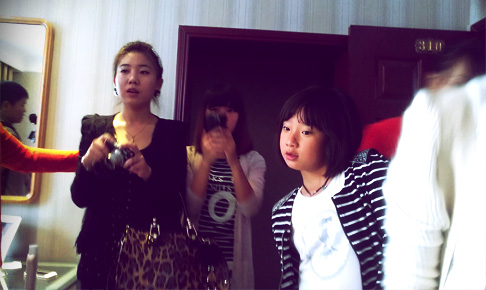 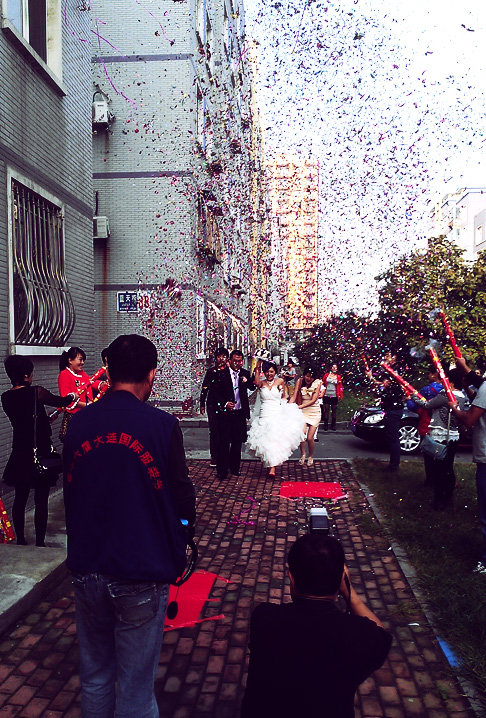 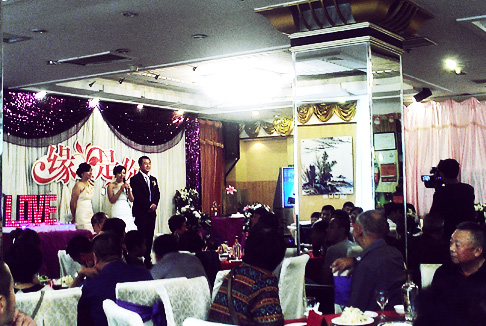 The picture-taking is almost ceremonial in itself, a record of the bride and groom performing the endless list of customs and blessings that seal the deal. Eating the four types of nuts and seeds that symbolize giving birth to a son quickly. Posing with a bowl of pomegranates. Eating dumplings. Holding wedding shawls. Decorating the bridal chamber. And a few tidbits adapted from the west. 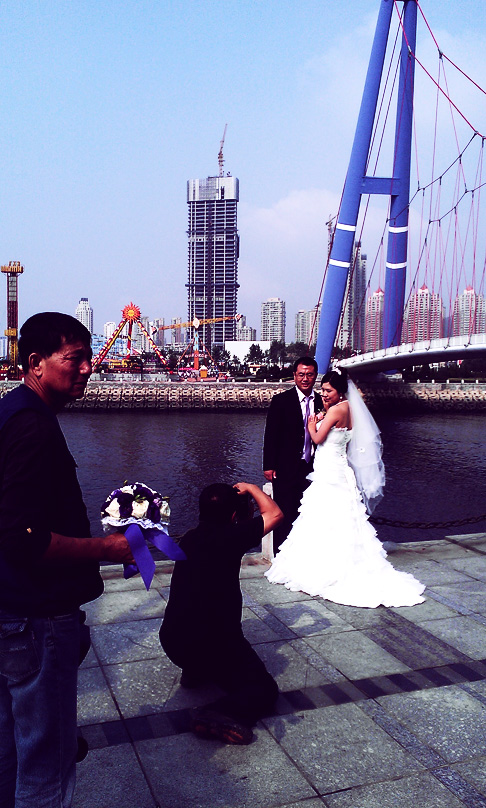 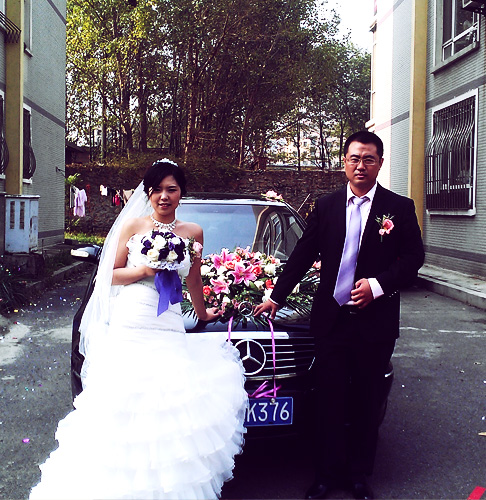 ‘Course, the best part comes when all the bridesmaids lock the groom out of the bridal suite, letting him past only after he humiliates himself and shouts a declaration of love. 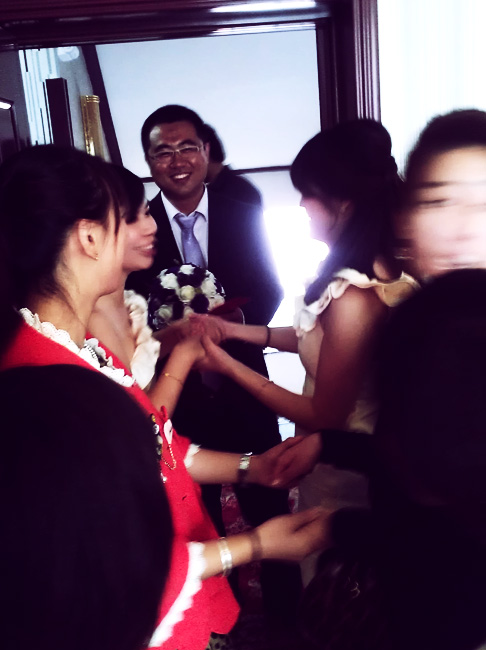 LiuChi changed from the western wedding dress into a traditional red qipao right after the ceremony and just before the groom got wildly drunk doing ritualistic shots with each table of guests. She looked gorgeous, of course. 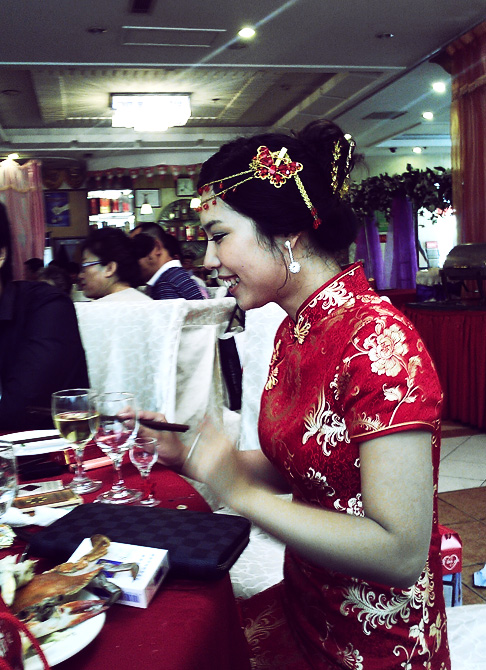 The food kept coming, and by the end, the plates were stacked three layers deep. 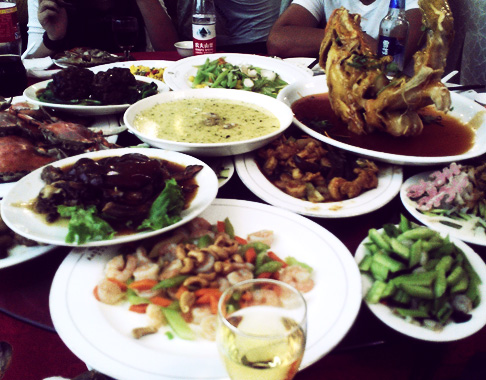 I had a few hours the next day to poke around Dalian before the 12-hour train ride back to Beijing. In Chinese terms, Dalian is a newborn city, only a little over 100 years old.

“This isn’t a very big place,” said my driver as we followed the motorcade to another photo shoot spot. Compared to your typical Chinese watering hole, maybe not, but DaLian is home to a population the size of the Houston, TX metro area – the fourth largest city in the U.S.

Streets are wide the way only socialist city streets can be, and everything feels slightly oversized, like it was meant to be grown into. Case in point, Xinghai Plaza, second largest city square in the world. At one end, “The Book”, a slab of dystopian cement commemorating the 100-year anniversary of Dalian’s founding. 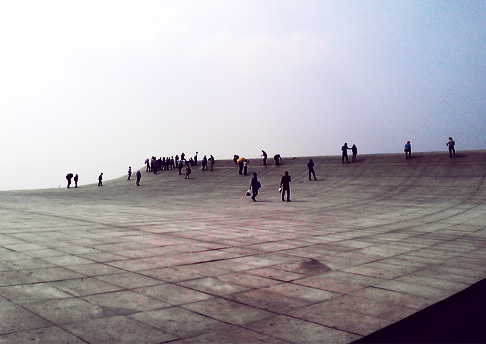 And right in the middle, a huabiao the driver insists is prettier than the ones at Tiananmen Square. 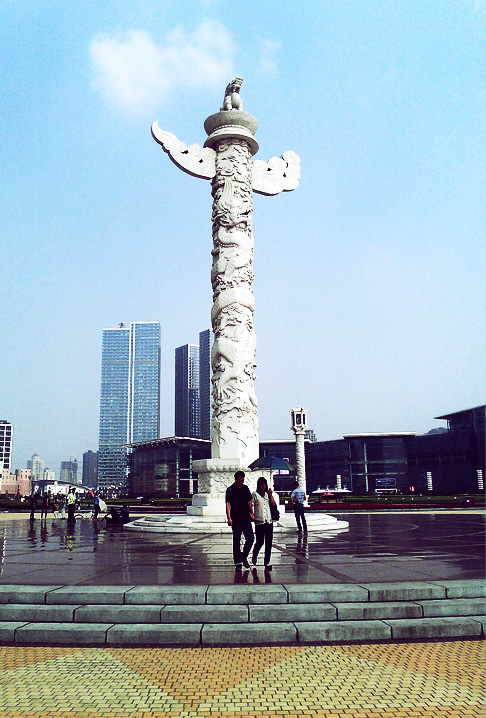 “Created by Bo XiLai himself,” the driver said, with a chuckle. I wonder if he spoke more reverently of the thing before Bo XiLai was cast down and disgraced earlier this year for his involvement in his wife’s murder of a British businessman. She got him drunk and poured animal poison into his mouth. That’ll re-purpose a monument any day.

Xinghai Plaza abuts the bay, and the shoreline is a mixed swath of theme parks, offshore refineries, shipping boats, luxury housing and beach resorts – industry and recreation in the same square mile of sea. Rolling up my jeans to mid-calf, I put two feet in the BoHai, drawing them out twenty minutes later to the overpowering smell of sewage and seaweed – a gift, I imagine, from the petrochemical plants that dot the region. I reeked faintly for several hours. 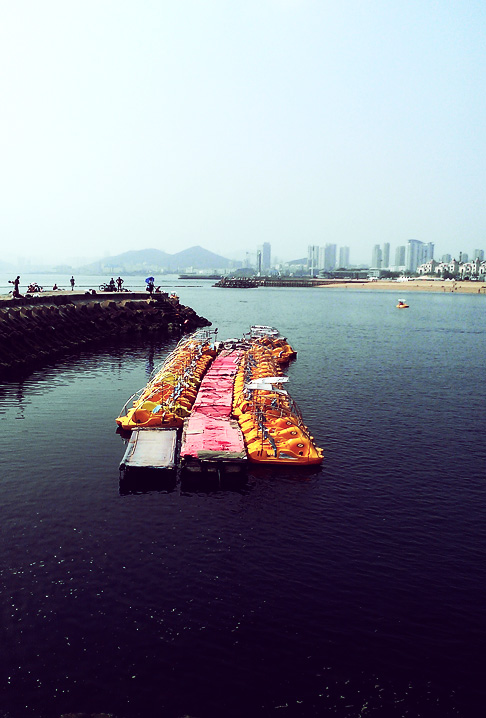 I rode back to Beijing in my first-ever soft sleeper cabin with a shy Liaoning psychology student traveling to a graduate program acceptance interview and The Odd Couple: a big, brassy woman in the publishing industry and her very petite and very outspoken friend, a professor with a doctorate in law. The latter had just gotten back from a one-year study abroad program in Ohio, which as far as she was concerned, was paradise.

“I love America!” she gushed, and a serious of loud sighs from the other end of the cabin made it clear that her friend was tired of hearing about it. “They let me return a big bag of tomatoes at the grocery store, and no one even asked me why!”

“Surely,” said Big Brassy, turning to me, “that’s not something that’s commonly allowed?”

You keep your land of easy returns and exchanges. I’ll take this one, smelly seashores and all.