I spent the better part of Christmas Eve morning sitting in an empty concession stand outside of Solana shopping center waiting for the two very confused young ladies behind the counter to figure out how to bake a pizza slice.

“Why does this oven have so many knobs?” whispered one to the other, loudly.

“How should I know? No, turn it that way. The OTHER way. Why do foreigners use these things? Hey, maybe the customer knows.”

At long last, my garden slice was shoved across the counter, topped with – oh joy – crunchy cucumber and partially-frozen corn.

The pizza stand shared the space with what I can only infer is a coffee shop called “Yikes! The Spot.”, not to be confused with more famous establishments “Crap! A blemish.” and “Uh oh! My period.” I considered ordering a coffee or a “Mike tea with yam currant cereal” but taking into account the speed at which the pizza was produced, I figured the next twelve years of my young life would be better spent elsewhere. 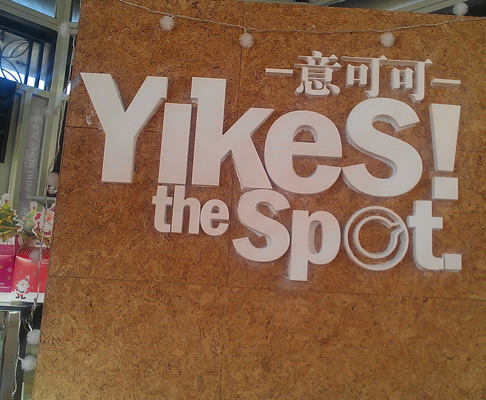 Had I been in any kind of a hurry, I might have been frustrated at the wait, but after yesterday’s mega death match with TaoBao, China’s hottest online shopping portal, and its standing army of Chinese online payment interfaces, staring off into space is about all the heavy mental lifting I can handle today.

Yesterday started out rather pleasantly. I stuck my head into a local bookstore. Bought a set of speakers for some Christmas movie magic. And I girded my girly loins for a long sit-in at Industrial Commercial Bank of China.

Despite the invariable multi-hour wait to speak to a teller, I like ICBC. You can pay your water, electrical and gas bill in one go (just bring in the receipt that the billing people tape to your door), their checking accounts are totally free, and you can’t toss a crab apple without hitting a branch office. So, daydreaming about never having to haul a single piece of furniture home from IKEA ever again, I figured I’d do the rest of my apartment shopping on TaoBao.com. For that, I needed a Chinese bank account.

The tellers were patient. I filled out forms. I filled out the same forms again. I nodded a lot and said “yup” a lot and a lot of people fussed over my foreign ID.  It all seemed rather straightforward, really. And just as things were wrapping up smoothly, the bank teller handed me this: 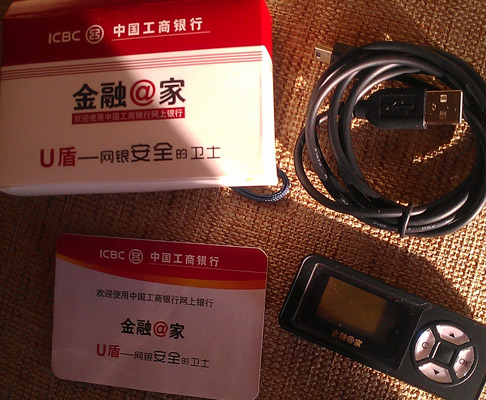 “Don’t let anyone else use it,” she said. If she had been wearing glasses, she would have looked at me balefully over the top of them.

“You plug it into the computer. Com-PU-ter.”

So home I went to give the Mysterious Device a whirl. I plugged it in, and a big “ICBC” logo flashed on my monitor. And then nothing happened. I pushed some buttons. Poked it. Still nothing. “Meh,” I thought, pitching it off the side of the couch, and promptly forgot it existed. To the TaoBao mobile!

Okay, so I’d never navigated Chinese ecommerce.  But how hard could it be, really? Find something rad, add to cart, enter bank card information, rejoice. A few hours of poking around, and I found a pretty awesome coffee table. Added to cart, confirmed order, and prepared to pay online.

Pay online. Such small words for such a far-flung circle of hell.

What happened over the next seven hours can only be described as “doing battle”, and at this moment I’m not 100% certain whether I ordered a coffee table or authorized the Chinese mafia to launder money through my bank account. At hour two, I began to hallucinate new browser windows.  At hour four, I started to wonder if the Chinese had actualized an alternative system of economics under which people exchange pure liquid rage for goods and services. At hour four point three, I cried. And at hour seven, emotionally depleted and twitching a little, I gave up.

I had registered for online banking. I had set up some kind of IE-only browser-based-but-you-have-to-download-and-install-it application called “Banking @ Home”. I installed “security drivers”, whatever those are. I made passwords for AliPay, China’s Paypal equivalent. I made passwords for TaoBao. I tried direct bank transfer, but couldn’t figure out what info they wanted from me. I tried putting in my card number, but the form validator wouldn’t accept my foreign passport as a valid ID.  I gave half the Chinese internet my bank card number. I stared at, and gave up on, a screen called “Pay by pre-paid voucher”. I made up secret security questions and secret answers. At one point I had five programs open, and they all seemed to be telling each other juicy secrets, but none of them seemed to be helping me pay for my coffee table. I pushed next. Next. Next. Next. But nothing worked. The big red X is truly universal.

And suddenly, just as a disembodied fatherly voice told me to fall into the white light, I sat bolt upright, scrounged around under the couch, and dug out the Mysterious Device. I stared at it. It stared back at me. I plugged it in again. I tried to check out one more time. “Enter password for your USB key.” I tried one. It worked. “Click OK twice on your USB key to finalize your order.” I pushed “OK” twice on the Mysterious Device. And magically, miraculously: “Payment succeeded! Congratulations.”

Immediately, I received a private message from the coffee table manufacturer. “Thank you for your perseverance.”

“How do you know I was ‘persevering‘?” I wanted to scream. “I could have been taking a very relaxing bath.”

Despite the traumatic checkout process, the TaoBao “finding and buying stuff” experience is actually totally amazing, and uniquely Chinese. Like eBay, anything and everything you could ever want you can buy cheaply. But like any good Chinese shop, no price you see online is the final sale price. You put your desired item in your cart, you confirm your commitment to buying it, and then the seller usually contacts you right away (or you can contact them) and you can haggle over chat, after which they modify the price in your basket before you finalize your purchase. Thanks to this “promise to buy it and then hash out the details” method, you can also get all kinds of crazy custom items factory-direct. I just bought a ginormous custom-cut living room rug from a carpet manufacturer in TianJin for about $150.00 – shipping included.

Successful transactions in capitalism: the true meaning of Christmas. Angels are singing.

Happy Holidays to all.