Thanks for Sainting Me, Google Social Search

If you asked my friends to describe my temperament, you’d be unlikely to hear, “cleaves to the heavenly bosom of the divine” or “spends hours in quiet contemplation of the spiritual”, and more likely to hear, “is really too stuck on the ‘that’s what she said’ thing” and “should stop eating after the second helping but doesn’t”.

And okay, so I get up at noon on Sunday. But hey, my MUD character goes on holy quests for arcane artifacts and mana potions several times a month, thankyouverymuch. And I have been known to positively crusade for cookies. So imagine my surprise at learning that, according to Google’s Secondary Connections list, it turns out I’m connected by a distance of only ONE PERSON to a smorgasbord of ACTUAL PRIESTS. Picture proof of my consummate holitude after the jump. 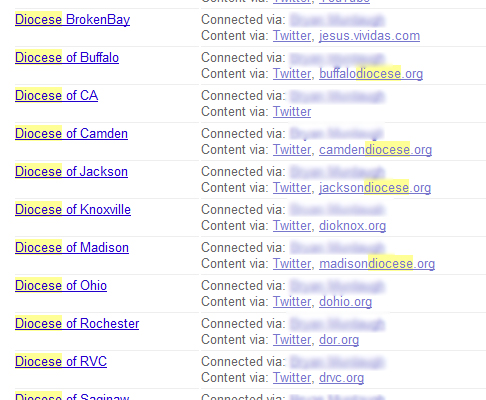 Want to see your own secondary connections?

Secondary connections, for those of you who weren’t aware that the internet is cataloging your every misstep and embarrassing drinkasode, is a running list of almost everyone that your friends chat with, follow on Twitter, and email, all handily alphabetized in your Google account. While everyone loves a taking a little stalky peek into everyone else’s social circles, we also must remember that when we gaze into the abyss, the abyss gazes back. And occasionally, the abyss tries to friend us on facebook.

And the abyss also ruins years of carefully not telling my husband my ex-boyfriend’s last name. Fuck you, abyss.

I don’t really mind the idea of secondary connections. I’m a member of the connected generation, and I accept the idea of “Privacy Invasion by Default” as an inevitability, as long as I can opt out. But I can’t. Neither, Google account holder, can you.

In my heart of hearts, I know that Google’s baby steps towards total, boundary-less interconnection are utterly unavoidable. I know that the world is hurtling headlong into an era of uncomfortable openness. I know that in 50 years, the kiddies are going to laugh so hard at my antiquated notions of “privacy”, they’ll pee themselves and drop their ice cream sandwiches. I know I can’t stop any of this, and secretly, the thought of living with intertubes hardwired into my brain gives me the good shivers. But I’m just not ready yet.

So, knowing full well that this statement has been thrown back in Google’s face enough times to make it lackluster and impotent, I say it again: “What happened to ‘do no evil’?” Please, Google, give me an opt-out.

So what else is up this week?

Reveled in the exciting launch of Visual.ly – I love infographics – they’re the romance language of the universe. If you were conducting Spice trade negotiations with the Harkonnens, you’d use math. But if you were, say, making passes at a Klendathu female warrior bug, you’d have a better chance of getting some with a textured minimalist chart on the evolution of carapace attractiveness. This week saw the launch of hot infographic gallery and inspiration site Visual.ly. Inter-species Don Juans rejoice.

Saw a good show – Two hats off to Dylan Thomas & The Over Easy Breakfast Machines, one for ensuring they’ll have the number one search engine result for their band name for ever and ever for the rest of eternity, and two for an awesome live show.