Twelve hours up on the train, and due to the ??ness of it all, and having an 18-hour non-express return trip to look forward to, Elena, Eric and I navigate through the city of Haerbin, China’s northeastern city of lights. I tried to explain the magnificence of my last trip on the way up, crushed between the top sleeper berth and the roof of the train, and in doing so may have hyped it up beyond salvation, but nevertheless…

The Ice Lantern Festival, quitted mere hours ago, was not so sprawling as I remember it, and management has adopted Disneyland’s nickle and diming policy, but that didn’t detract from the experience of walking the length and breadth of a town constructed entirely of ice-sculptures and massive snow murals, some several stories tall, all lit internally with bars of neon light in myriad colors. The snow came lightly down in glittering flecks and topped everything with a layer of powder, lending some traction to the ice-block stairs up to the Great Wall slope, a slide made of – yeah – ice, carved to look like its namesake. We rushed down and ended with a puff in a drift, legs skyward. 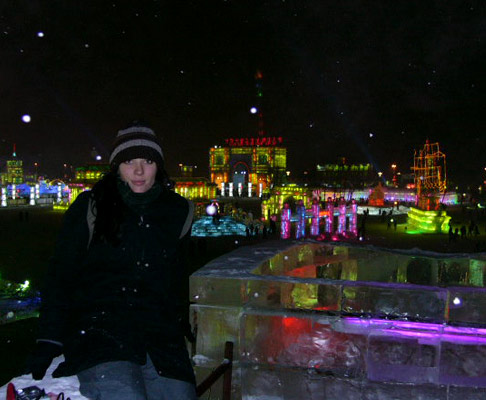 A replica of the Louvre, a great Buddha rendered in packed snow, the Egyptian pyramids, churches and monuments, all had their own plot and marvellers.

The walls of the ice mazes, reaching only waist level, let you see the exit with pointless ease, and so at Eric’s suggestion we took the next maze on our knees, crawling into dead ends to shouts of “hardcore!” “good exercise!” and “You’re going to ruin your pants!” from the passing Chinese. We ended up in such a fit of laughter down there between the glowing walls as we slid and skittered forward, and finally stood up, hair frozen and faces red.

I did lose my wintertime spirit watching the sled teams, shivering dogs harnessed to rough sleds and cowed, ears down and tails in against the cold and their masters, running in a pointless circle, hauling oblivious passengers around and around. As I watched and racked my brain – cut them loose? Curse the owners, poor rural villagers themselves? Buy them? – an exhausted Labrador passed me, strapped to an empty sled and a German shepherd, and from the corner of his eye looked at me, and it was no dumb animal stare, but the slavery of generations, human and animal was there – before he looked back at the ground where he felt his gaze belonged. I left. I left.